The Evolution of Draught Beer

Home » The Evolution of Draught Beer

The Evolution of Draught Beer

From hand pumps to kegs to cans and bottles – beer comes in many wonderful shapes and sizes! But the question still stands – how is beer today able to be served at the perfect icy temperature and level of carbonation? Well, you can thank the monks! 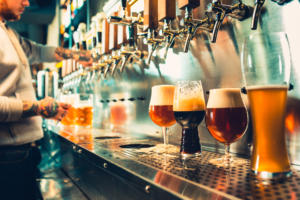 Did you know that medieval monks were one of the first groups to store beer in barrels? The revelation was brought about due to storage issues because the monks had begun producing beer in large quantities for their own use. Using barrels enabled the monks to effectively store their large beer supply – now that’s a necessity we can understand! It was not long for this revolutionary concept of storing beer into barrels became widespread practice among the general population – and thus the draught beer history began!

Draught beer – also known as draft beer – is beer served from a cask or keg, which was the first method of getting beer from the brewer to the beer drinker. Over the last 300 years, brewers and drinkers alike have benefitted from developments to draught beer methods – read on for the draught beer evolution!

In the 1800s, storing beer in barrels was widespread and innkeepers would use hand-pumps to dispense the beer manually, using muscle power rather than gas to draw the beer from the barrel to the glass. In the late 1800s you could buy a glass of beer for as cheap 10 cents, equaling around $2.30 today – don’t we wish that was still the case!

In the early 20th century, the monk’s storage solution of barrelling beer was drastically improved by James Watney – an English brewer who introduced artificial carbonation. It wasn’t long until draught beer being served from pressured containers spread throughout Europe and eventually the rest of the world. By the early 1970s, the term draught beer almost exclusively referred to beer served under pressure, as opposed to the traditional cask or barrel beer.

Today, beer kegs are often made from stainless steel, aluminium or polyethylene making them lighter, less bulky and more transportable than the original wooden barrels of the 1800s. Most bars and pubs now use pressurised beer taps to serve the perfect beer. While beer taps are far more convenient to use, there are still bars and pubs around the world today that use hand-pumps as a novelty, paying respect to the wonderful evolution of draught beer through the centuries.

As the scale of beer production continues to grow, draught beer continues to provide a superior beer drinking experience. Storing beer in kegs limits exposure of the beer to the external environment, meaning less light degradation as well as reduced oxidisation – keeping the beer fresher for longer.

Read our previous blog post – ‘Why Does Beer Tastes Better on Tap?’ to find out why draught beer tastes so damn good!