What’s the deal with the colour of beer?

Home » What’s the deal with the colour of beer?

From pale gold to amber to brown and almost black – the colour of beer has greater meaning than you may think. So, next time you’re enjoying a cold one with your mates pay attention – the visual appearance of beer can actually give you a hint about what taste and flavour to expect! 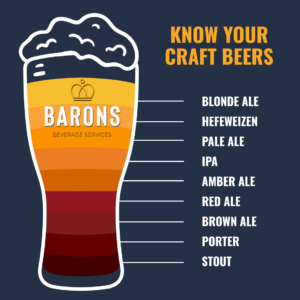 How is beer colour measured?

Fun fact – the colour spectrum of beer is most popularly measured on a Standard Reference Measurement (SRM) scale, which measures how much light can pass through 1cm of beer in a photometer. It is one of several scales modern brewers use to specify beer colour.

So, what actually causes the different hues in your brew? There are five key steps in the beer-making process that will affect the colour – read on to find out how!

Before a beer is brewed it goes through a process called malting, a chemical reaction where barley and wheat are converted into sugar. The process involves four main steps – steeping, germination, kilning and roasting. Steeping is primarily used to extract colour and flavour from what would otherwise be a malt extract base. It involves immersing grain in temperature-controlled water, which adds moisture to the grain. Once the soaking is complete the germination begins, where the barley is placed in controlled conditions to convert it into malt – this stage produces fermentable sugars. The kilning stage is next, where the grain is air-dried, causing chemical reactions that cause further colour and flavour development. The last step is roasting – which involves heating the malt at high temperatures for varying periods of time. The roasting stage is the number one factor that influences the colour of beer – the more the malts are roasted, the darker the beer will be. Kind of like a piece of bread – the longer you leave it in the toaster, the darker your toast!

Next step in the process is caramelisation which occurs after the malting process is complete. Caramelisation is where the sugar formed within the germination stage is broken apart by high temperatures, producing flavours similar to those of caramel or toffee – yum! It’s through caramelisation that beer can develop a darker colour. Additionally, the use of darker caramel malts will also likely result in a heavier flavour.

Filtration can reduce a beer’s depth of colour significantly, as the degree to which the beer is filtered determines its opacity and haziness. Heavy filtering can result in lighter beers as yeast, tannins and some proteins are removed – resulting in greater transparency with more light passing through the liquid.

What some beer lovers don’t know is that the ageing process is a significant contributor to the colour of your beer. Over time, particles like yeast and polyphenols, which are present in the beer, fall to the bottom of the liquid. This reduces light reflection – making the beer appear darker in colour!

While the colour of beer does not guarantee a particular taste or flavour, it can provide a fairly accurate assumption. Generally, you can expect darker beers to have stronger flavour notes like chocolate or coffee, which are brought out with longer roasting and caramelising times. On the other hand, a gold to amber beer is likely to have fruitier or nuttier flavours and a light tone is associated with smooth and subtle flavours with notes of citrus or tropical fruit.

Have we made you thirsty yet? What are you waiting for – go get yourself a rainbow of beer!